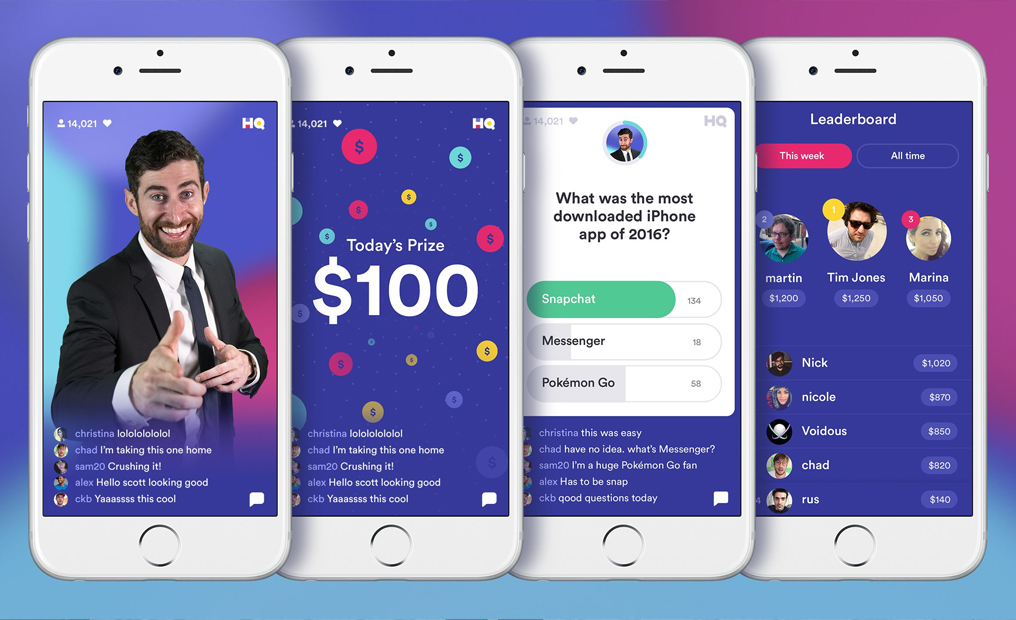 Disclaimer: I in no way endorse cheating, I created the application as an experiment and a proof of concept.

It was a Thursday night and I had just gotten back from having classes from 8am to 6pm, and I was exhausted. Shortly thereafter, HQ Trivia's show went live and I opened it up. I am by no means a jeopardy god, but while playing the game, I realized that there was a way I could beat it. I'd beat it with Java.

I immediately got to work designing a Java application I called TessOCR. The premise was fairly simple. Using a Java wrapper on the Open Source Tesseract library, I was able to write an application that used Optical Character Recognition (OCR) on a user defined portion of the screen. Upon detecting the text, the application would automatically use Google to find the result. Thanks to Quicktime, I could render my phone screen on my laptop and then use OCR on that. In order to detect the portion of the screen to use, Tess runs as a semi-transparent white overlay (10% opaque so quite see-through) on the left half of the screen. By putting Quicktime on that half, I could click two points on the white overlay to define the "Active Area" which would persist until closing the application. Hitting the space key triggers capturing a BufferedImage of the "Active Area" and uses Tesseract to detect the text and Google to find the result within a couple seconds, bringing up a page that displayed the relevant results with the answer choices highlighted on the page for easy viewing.

I tested my application first with screenshots from old games, and then with youtube videos of them. I then tested it by spectating live on the quiz shows and with it was able to find the answers for 10 or 11 out of 12 questions fairly consistently, meaning potentially winning $1-5 per game per day.

If data was being streamed to my phone live with questions and answers, then theoretically that data could be intercepted. This is what I set out to do. First, using mitmproxy, I acted as MITM (Man-In-The-Middle) with my phone and the internet and opened the app. Immediately I was able to read a very curious piece of JSON that was sent when the game was offline. The interesting part about the JSON was this element called "broadcast" which was set to null. My suspicion was then that if I queried the same URL during a live game, setting the appropriate headers, I would receive JSON with a "broadcast" object containing meaningful data. So, I started working on a quick C++ application to do just that.

Sure enough, once I queried the HQ server, I received a "broadcast" object containing a new piece of information, an interesting URL which was referred to as the "socketURL". Familiar with the concept of a web socket, I had a feeling I should connect to this live broadcast socket and would receive relevant data streamed in an alive connection. This is when I ran into the first problem: connecting to a socket in C++ was a bit of a pain.

For most cases, this would be a point where you turn around and start using a different language. However I was in a class where our projects had to use a C++ framework, so my hands were tied. So, I came up with a work around: writing cross-languages. I was familiar with how to connect to a web socket in Swift, and since I am developing on a Mac, I decided to write my program in multiple languages. The primary application is written in C++, using an Objective-C++ bridge to call a Swift web socket library where I process the incoming data and send it back to the C++ code. Sure enough, once I connected to the web socket, I was hit by a constant stream of JSON data, way too fast to read everything. So, I wrote a filter to only print out the incoming traffic that contained the word "question" case-insensitive and I was now able to see questions and answers, nicely packaged in JSON.

Next I created the interface to render the questions and answer choices and connected everything to use various API's including the google custom search and wikipedia. By doing basic statistical analysis on all the results and some word processing on the questions and answers, the bot was able to generate confidence levels in each choice. This extended to being able to handle negations and select which option doesn't apply in negated questions.

This bot was capable of automatically detecting a live game, entering the game pretending to be a real user, and then finding the answer for each question in under a second.