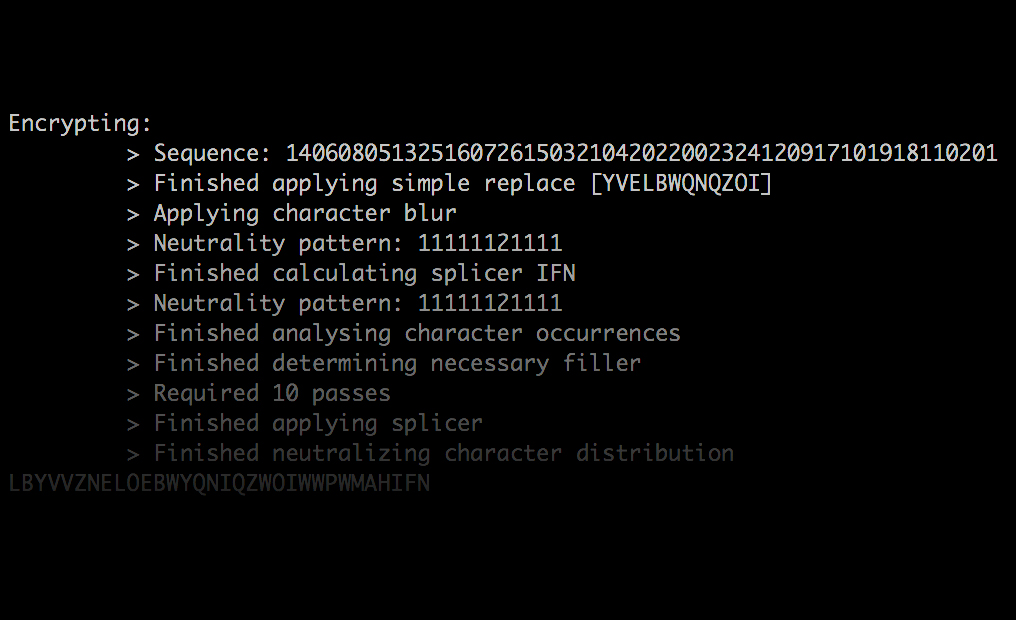 I created the encryption over a few days after school, starting with building a simple substitution cipher into the code which was uniquely generated based on the password. That way applying the substitution cipher to the same message using two different password would result in two completely different outputs. That was simple enough, the real challenge was in beating Statistical Frequency Analysis. SFA, or what I like to call The Scrabble Method, looks at the distribution and frequency of characters in an encrypted message against the frequency of characters in the English language. By doing this, we can statistically break a substitution cipher. To beat that method, I developed an algorithm for inserting characters throughout the entire message, breaking up the message's content with a variety of different characters, unique to the message and password. The end result is an encrypted message that looks random and has roughly the same frequency and distribution of every character. The code is now open-source and available on my GitHub account.

The goal was to create an encryption which was unique to the password and thus could only be broken by someone who knew the password, rather than knew the encryption method.

Since every encrypted message can be different based on the message or the password, the brute force method of testing various inputs is nearly impossible since the attacker would have to not only test every possible message but also test every possible password. The number of possibilities that would have to be tested would scale at a rate of c27^(m+p) with m being the number of letters in the message and p being the number of letters in the password and c being the time it takes to encrypt one message. So with a ten letter password and assuming c = 1 second and that is only with 10 characters for a password, let alone something like 20...

Step 2: Generate key-value pairs using a proprietary algorithm which creates the connections based on the sequence number.

Step 3: Apply a 1:1 swap of the keys and values which is a substitution cipher.

Step 4: Analyze the distribution of characters in the encrypted message.

Step 5: Automatically determine the appropriate way to neutralize the message ie: add filler characters that disrupt the message and prevent character analysis aka "the scrabble method" (coined by yours truly) aka Statistical Frequency Analysis which is commonly used to break substitution ciphers like the one we applied in step 3

Step 6: Calculate the unique neutralizing numbers and insert into the message using a similarly encrypted tag.

Decryption is accomplished by undoing each step in the reverse order.